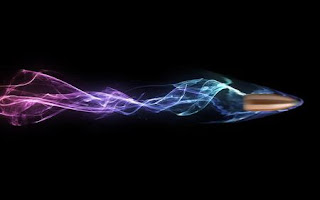 dashing fast from somewhere to some destiny

Does it want to break some shining crystals..

or some dusty window glasses..

or the wings of some benign bird on a branch…

Or.. is it looking for the blood, splashing off from some heart..

No.. Its tracing the way to its undefined destiny..

A fortuitous slip from a foolish gun

It’ll move around the world..

as defined by the Newton’s laws..

And then.. pierce into the rockstones of peace..

losing its power and frenzy vigor..

turning to a rusted metal piece.. It’ll Rest In Peace…